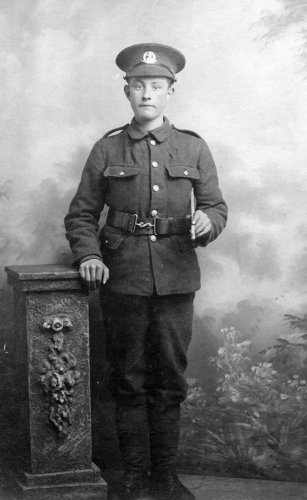 John Henry was born on 2 July 1894 in Spratton, the son of an Irish waggoner, Thomas Cooke and his wife Sarah Ann. He was generally known as Harry. The large family of five sons and two daughters lived in a small three-roomed cottage in Bakers Lane, Spratton. Harry and his younger brother Albert were both farm labourers and both served in the First World War.

Harry was conscripted into the Norfolk Regiment in 1916 aged 22 and was sent to fight in the Mesopotamian Campaign against the Ottoman Empire some months later. He then went to India and served on garrison duty at various stations. He was demobilised in August 1919 and received the British War Medal and the Victory Medal.

He married Beatrice Buckby of Desborough in July 1922 and died on 12 March 1987 aged 92. Both Harry and Beatrice are buried in the new parish cemetery in Spratton.

(Harry always spells his surname as COOK and his brother Albert spells it COOKE. On the census forms the family always use COOKE)