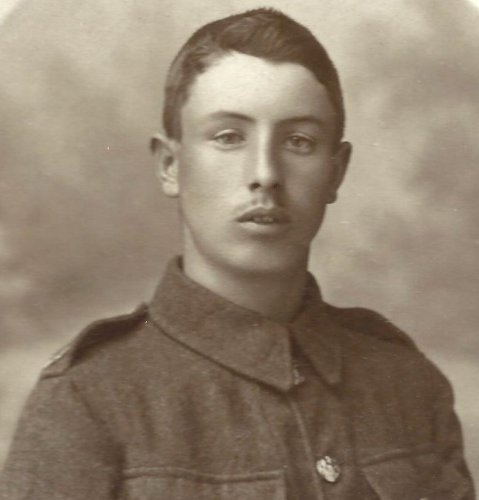 Albert Branson was born on 5 October 1895 in Spratton where his father Charles was a market gardener who later became the farm manager at Broomhill Farm. His mother Florence was a Spratton-born girl whose family were long-established in the village. The family consisted of three sisters and five brothers.

Albert volunteered in May 1915 and was sent overseas with the Northamptonshire Regiment on 26 October 1915. His daughter says he was wounded in the neck in 1916 and treated in a barn or sawmill for about two weeks. When he recovered he returned to the Front. He was a stretcher bearer.

He returned home safely and was awarded the 1915 Star, the British War Medal and the Victory Medal. He died in 1968 aged 72 years (death certificate) and is buried with his wife Mary in the new parish cemetery in Spratton. (The Inscription on his grave reads died 28 June 1967 aged 71)