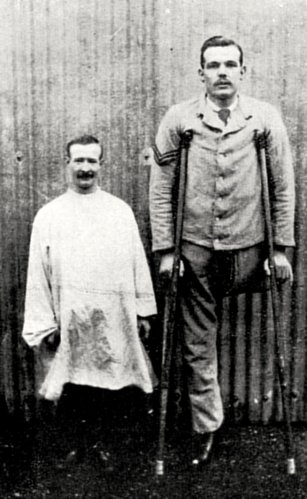 Jack was born in Barnet, Hertfordshire in 1890, the son of George Hayter from London, a gardener, and his wife, Priscilla, who came from Huntingdonshire. Jack was one of ten children. All five of the sons served in the First World War: Arthur, Frank, Harold, Jack and Walter, but sadly Walter was killed in action in 1915. The family moved around frequently in order for George to find work and the children were born in a number of different places. Jack spent his early years in Brixworth but he was already a professional soldier and living away from home by the time he was 21.

Since he was in the Regular army (he enlisted in January 1908), he was called on to fight as soon as war was declared. He was sent to France with the 1st Battalion, Grenadier Guards early in October 1914 and two weeks later he had distinguished himself in action at Ypres. He was awarded the Distinguished Conduct Medal "for great gallantry on 16 October, 1914, at Ypres, when he performed invaluable work and showed conspicuous courage in carrying messages, enabling some Companies on one occasion to get out of a difficult position".

Jack was severely wounded in a shell attack when all the men around him were killed. He was reported missing soon after. He was not dead, however, but had been taken prisoner by the enemy forces. He was sent to a Prisoner of War camp in Hannover in January 1915 and at the end of March he was moved to the camp at Aachen where there were a number of hospitals for British prisoners. He apparently underwent 53 operations and at some stage had his left leg amputated. The Northampton Independent dated 12 July 1915, mentions that Jack was a Prisoner of War in Germany, receiving parcels from the Independent.

On 6 January 1917 while still in the army, Corporal Jack Hayter married Ethel Downes in the bride's parish church of St Luke's, Chelsea. The bridegroom gave his address as Roehampton, Surrey. The bride's father had been in the army and was an army pensioner. Because of the wounds he had received, Jack was discharged from the army as medically unfit one month later. He was awarded the Distinguished Conduct Medal and the 1914 Star with Clasp as well as the British War Medal and the Victory Medal. He was also issued with a Silver War Badge to wear at home to show that he had been wounded in the war.

Jack was living in army residential accommodation in Wimbledon when he died on 5 November 1932 at the early age of 42.