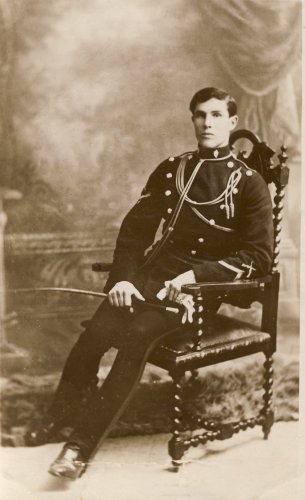 William was born in Spratton on 9th April 1892 the son of Joseph Martin, a farm labourer, timber carter and later a milkman, and his wife, Elizabeth (née Bromwich).  The Martins were a long established family in Spratton who had lived in Manor Road and then Station Road (now Brixworth Road). Five brothers in Joseph and Elizabeth’s family served in the First World War – Harry, Joseph, George, William and Walter. In 1901 the family was living at Calendar Farm, Cottesbrooke and on leaving school William became a groom at Cottesbrooke Hall.  On 28 December 1910 aged 18 he joined the Royal Irish Lancers, known as the Lancers of the Line.  He was in the cavalry and spent time in Ireland before war was declared in August 1914 when he was posted immediately to France

He enjoyed life in the army and was promoted to Corporal in 1915 and then to Sergeant in April 1916. He took part in all the major battles the 5th Lancers were engaged in and was wounded at Ypres in 1915 and on the Somme in 1916.

On 31 January 1917, whilst home on leave, he married Mary Byrne at the Roman Catholic Cathedral in Westminster.  Later that year, when he returned to the Front his bravery earned him the Distinguished Conduct Medal:

8 July 1917 Citation 3161 London Gazette:  Conspicuous gallantry and devotion to duty in rallying the remnants of his troop and encouraging them to continue fighting.  When ordered to retire, he remained to the last, and was for some time alone in the trench with the enemy but succeeded in getting away after covering the retirement of his men.

In March 1918 he was seriously wounded in the leg. A bullet through the thigh severed his sciatic nerve so that he had no use in his foot.  He was captured by the Germans on 26 March 1918 and was sent to Prison of War camps in Clogny, Guise and Laugensaiza in Saxony.  He wrote an interesting account of the treatment he received as a prisoner.  He was repatriated to hospital in England on 24 October 1918 but never fully recovered from his injuries.  He was discharged as permanently unfit on 20 January 1920. As well as the Distinguished Conduct Medal, William was awarded the 1914 Star, the British War Medal and the Victory Medal.

William returned to Spratton to live with his wife and children and was active as a coach in the village boxing club, despite his wounded leg.  He died in 1950 aged 58 and is buried in the old parish cemetery in Spratton with his wife Mary. 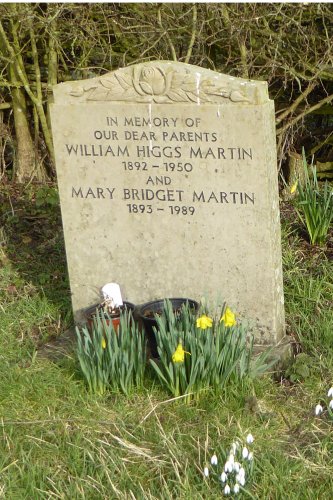 The grave of William Higgs Martin and his wife, Mary, in the old parish cemetery in Spratton

The grave of William Higgs Martin and his wife, Mary, in the old parish cemetery in Spratton