Fred was born on 28 August 1894, the son of John Balderson, a labourer in the ironstone quarries, and his wife Julia. The Baldersons were a long-established family in Spratton. He was the older brother of Bertie Balderson and the family lived in School Road, Spratton.

He volunteered as soon as war was declared in August 1914 and served first in the Royal Army Service Corps before being transferred to the Gloucestershire Regiment. He fought at Arras, Vimy Ridge, Messines and Ypres and received the Military Medal for bravery in battle. Early in October 1917 while home on leave he took his medal into the village primary school to show the schoolmaster, Mr Harry Smith. He returned to France and was killed later that same month in Houthuist Forest, near Ypres, in the second battle of Passchendaele. He has no known grave, but is remembered at the Tyne Cot cemetery near Ypres, where his name is engraved on Panel 72. He is also remembered on the Spratton War Memorial.

He holds the Military Medal, the 1914 Star, the British War Medal and the Victory Medal. 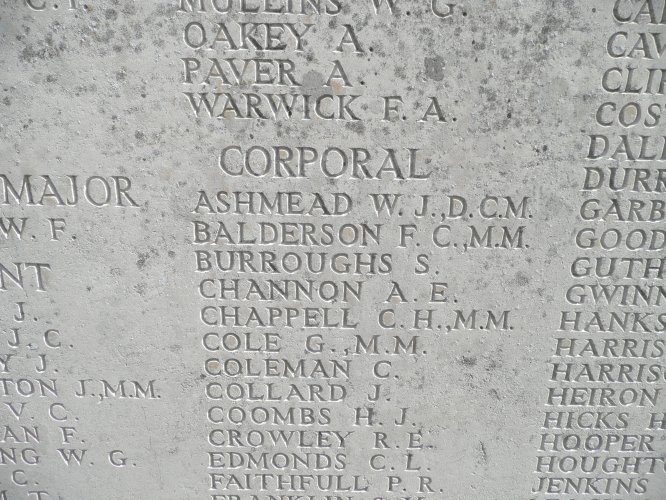