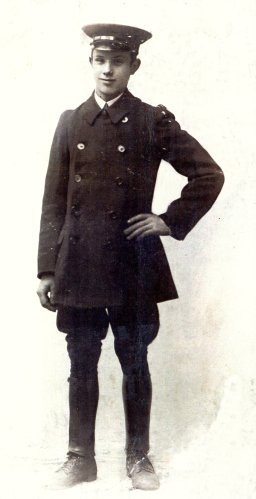 Charles Branson was born in Northampton in the summer of 1900 to Charles and Florence Branson. His father was a market gardener who later became the farm bailiff at Broomhill Farm and his mother was a Spratton-born girl whose family were long-established in the village. Young Charles has left written memories of his very happy childhood in the Northamptonshire countryside and his work on the farm with his father and brothers. He claims to have been very friendly with William Rhodes-Moorhouse, a young man who lived at Spratton Grange nearby and who went on to be awarded the first air Victoria Cross in April 1915.

His admiration for William Rhodes-Moorhouse may have led Charles to follow his example and join the Royal Flying Corps. However, he was extremely young and was not sent overseas. Possibly he became a driver. His name is on the Roll of Honour in St Andrew's Church Spratton, but very little other information has been discovered about his war service. After the war, he owned a garage in Yew Tree Lane and later moved to Warwickshire. He died in 1975.