Arthur Walter (sometimes known as Walter) was born on 7 March 1895 in Spratton, the son of Alfred Edward Page, an agricultural labourer, and Sarah Elizabeth (née White).  His mother came from a long-established family in Spratton. He was brother to Alfred, Samuel, Bertha, Jennie, Frank and Daisy and they lived in the High Street. Three of the brothers served in the First World War – Samuel, Frank and Arthur Walter. On leaving school Arthur Walter became a farm labourer and then gardener to Captain R B Brassey of Cottesbrooke Hall.

Arthur Walter joined the 5th Battalion of the Northamptonshire Regiment and was posted to France 31 May 1915.  He was wounded in the back and chest at Ypres and repatriated to a hospital in Leicester but died of his wounds on 24 July 1915.  He was buried in the old cemetery, Brixworth Road, Spratton with full military honours.  His parents were later buried in the same place. He is also commemorated on the War Memorial in Spratton churchyard.

Arthur Walter was awarded the 1915 Star, the British War Medal and the Victory Medal. 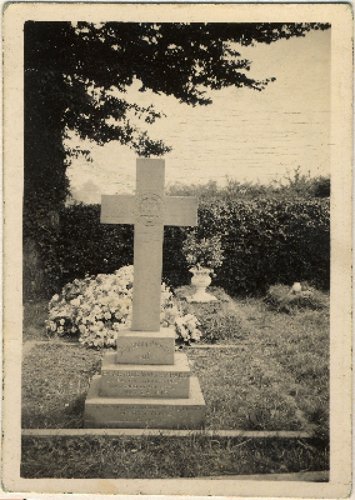 The grave of Private Arthur Walter Page in the old parish cemetery, Spratton

The grave of Private Arthur Walter Page in the old parish cemetery, Spratton