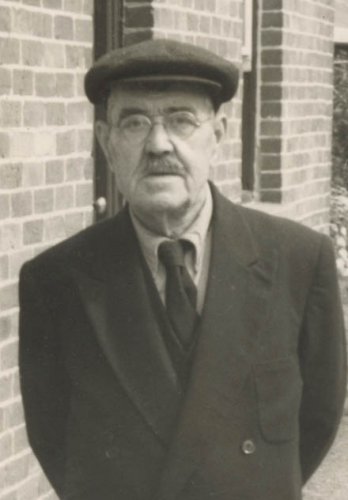 Arthur was born on 11 May 1881 at Blackwater in Hampshire, the son of John Tarrant, a garden labourer, and his wife Ellen. He came to Northamptonshire to find work as a steam roller driver and he was a boarder with Ann and William Frisby in School Road, Spratton.  On 19 June 1911 he married a Spratton girl, Emma Florence Manning.  A son, John Henry*, was born on 22 March 1912 and a second son, Reginald Charles, was born on 3 March 1914.

On 15 December 1916 Arthur enlisted in Northampton and he was called up for active service with the Royal Engineers a few weeks later, on 4 January 1917 aged 35.  His occupation as a steam roller driver almost certainly directed him towards his army job as a Sapper with the Royal Engineers Railway Construction Company. At the enlistment his medical classification was B2. He was discharged on 22 March 1919 and was awarded the British War Medal and the Victory Medal.

In his son John’s memoirs he said that he remembered that his father had fought in France, but he refused to talk about his dreadful experiences afterwards. He remembered that his mother worked for Mr and Mrs Moorhouse at Spratton Grange and his father did some      gardening work there as well.  He used to mow a piece of very flat ground near to the Grange that William Rhodes-Moorhouse used as a landing strip for his early flying machines. Arthur died in Spratton in the autumn of 1957.