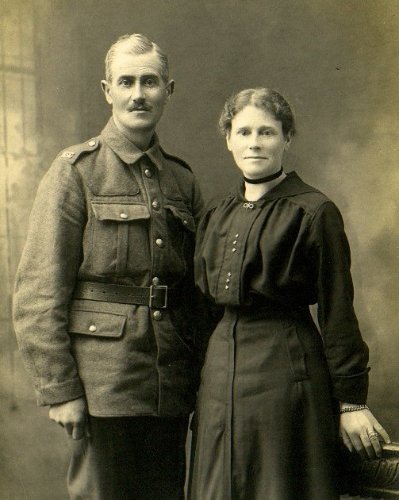 Arthur was born in about 1882 in Birmingham, the son of George Wood, a carpenter, and his wife Hagar.  He married Clara Maria Deakin, a lacquerer, in Birmingham in 1908.  He became a beer seller and in 1911 seems to have been living at 55 House Street in Birmingham.  In 1914 he became landlord of The King’s Head in Station Road (now Brixworth Road) Spratton and moved there with his wife, Clara and two daughters, Marjorie and Ida.

As a married man, Arthur was probably conscripted into the Royal Army Service Corps in 1916 aged 34. He was not sent overseas, but served at home in one of the Mechanical Transport depots in this country.

At the end of the war, he returned to Spratton and continued as Landlord at The King’s Head until the early 1930s.