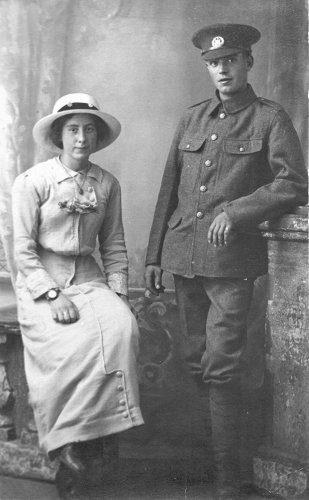 Arthur and Evelyn Dickens on their wedding day 6 October 1916

Arthur Dickens was born in Brixworth in 1894, the eldest of four sons born to Charles Dickens and his wife Elizabeth. When he left school Arthur became an ironstone labourer like his father and worked at the Scaldwell pits. He married Evelyn Taylor on 6 October 1916. Evelyn worked at Creaton Hospital and after the wedding the couple lived in Manor Road, Spratton.

Arthur enlisted in 1915 and was sent to France with the Northamptonshire Regiment on 11 December 1915. He fought at the Battle of the Somme in 1916 and was reported wounded in September that year. He returned home to convalesce and get married and was then sent back to the Front. He was finally discharged on 14 December 1918 and was awarded the 1915 Star, the British War Medal and the Victory Medal.

Arthur and Evelyn lived for the rest of their lives in Spratton and Arthur served in the Home Guard in the Second World War. He died in 1969 and is buried in the new parish cemetery in Spratton with his wife, Evelyn who died in 1990.