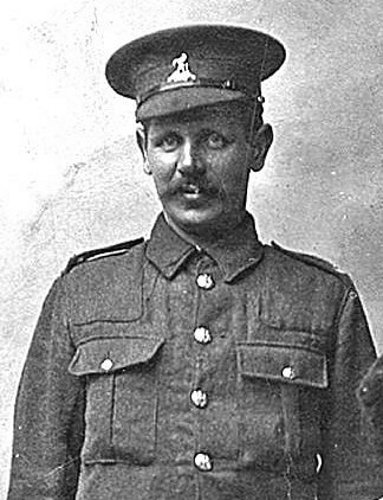 George was born in Yorkshire in 1880, the son of John Manning, an agricultural labourer from Spratton and his wife, Elizabeth, also from Spratton.  George lived with his wife, Kate (née Holt), and daughters, Christine and Norah, in part of what is now Dale House in Yew Tree Lane, Spratton. The couple had married on 7 July 1910.  He worked for Mr Harry Green, builder, as a bricklayer’s labourer.  His younger brother, Albert, also served in the First World War.

He volunteered on 10 December 1915 under Lord Derby’s Scheme and was called up in June 1916 into the Queen’s Own Royal West Kent Regiment. He was sent overseas with the British Expeditionary Force in October 1916.  He fought in France and was killed in action on 11 May 1917 at Vimy Ridge, but has no known grave.  He was 37 years of age.  George is commemorated on the Arras Memorial, Pas de Calais, in Bay 7 and on the War Memorial in Spratton churchyard. He was awarded the British War Medal and the Victory Medal.