Sidney Reeve was born in Spratton on 2 January 1899, the fourth son of George Reeve, an ironstone labourer, and his wife Lydia, both from Spratton.  There were six children born while the family lived in Spratton and two more when they moved to Northampton in 1901. When Sidney left school he became a boot finisher in the boot and shoe trade in Northampton. Four of the Reeve brothers served in the First World War – George, Richard (known as Harry), Samuel and Sidney.  Samuel, George and Sidney all died; Harry was the only one to survive.

Sidney was keen to join his brothers and play his part in the war and he volunteered on 25 September 1916 when he was only 17.  He had already served in the 3rd Battalion of the Northamptonshire Regiment as a boy and not been discharged until January 1916. He was mobilised on 7 March 1917 when he was 18 and sent to France with the East Surrey Regiment.

He took part in many engagements in various sectors of the fighting and his surviving military papers indicate that he went missing, presumed dead, on 19 May 1918.  His parents were not told officially until they received a letter from the regiment dated 10 January 1920. The National Roll of the Great War gives a slightly different story. His entry reads “…he was in action with his unit in the Retreat of 1918, during which he was badly wounded.  He unhappily died from the effects of his wounds on 19 May 1918.”  He is buried in the Pernois British Cemetery in Halloy-les-Pernois, France, with the tribute that he died of his wounds on 22 May 1918 aged 19.  Sidney was awarded the British War Medal and the Victory Medal. 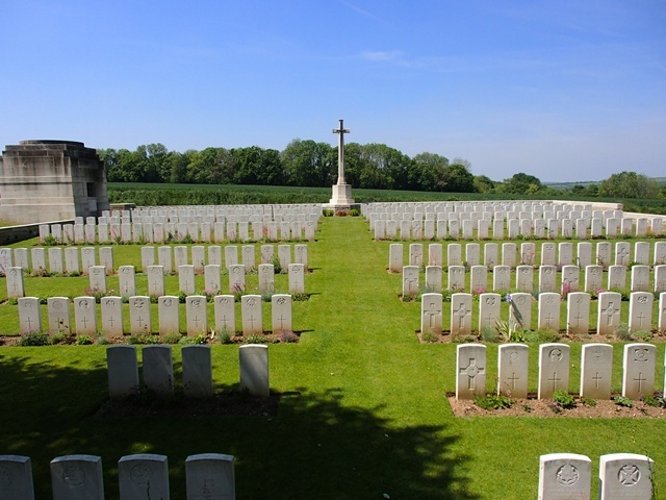