John Francis was born 1 July 1895 in Spratton, the son of John Wykes, a labourer from a long-established family in the village,  and his wife, Harriet (nee Middleton).  He lived in Manor Road with his siblings William, Walter, Mary, Evelyn and Lillian. All three brothers served in the First World War. When he left school he went to work for a local farmer, Louis Deacon Holt and he lived with Mr Holt and his wife Edith Mary at Holdenby Mill, working on the farm as a waggoner.

He volunteered for the army as soon as war was declared and joined the East Surrey Regiment on 20 September 1914 aged 19. He served at different times with the 4th, 8th and 1st Battalions and fought in some of the most important battles of the war. On the first day of the Battle of the Somme on 1 July 1916 the 8th Battalion, East Surrey Regiment went into the attack dribbling two footballs that their Commanding Officer had brought for his men to kick into No Man’s Land to encourage them to move forward. The 8th East Surreys reached and held their objective that day, although the CO and many of his men were killed. John Francis was awarded the Victory Medal and the British War Medal. 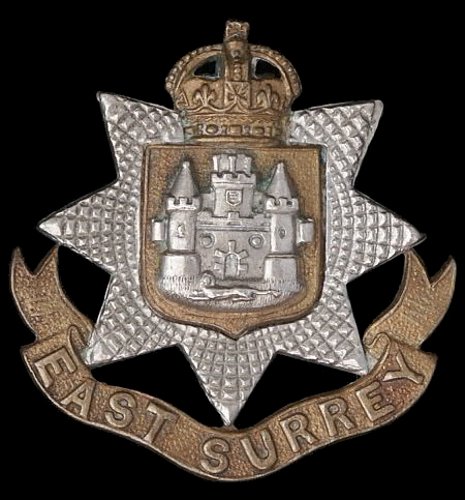