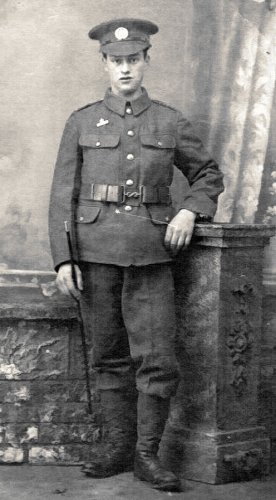 Arthur was born on 3 September 1897 in Spratton, the son of George Taylor, a bootmaker from a long-established family in the village, and his wife Clara Elizabeth, a laundress.  He lived in Manor Road, Spratton with his parents and five siblings, George, Evelyn, Mary, Bertha and Louis.  On leaving school Arthur worked as a farm labourer.  Both Arthur and his older brother George served in the First World War.

He volunteered in November 1915 under Lord Derby’s Scheme and was drafted to the Western Front in 1916 aged 19.  He took part in several engagements, including those in the Arras, Bullecourt and the Somme sectors, and was wounded in March 1918.  Later he was sent to Italy, and served on the Piave River and Asiago Plateaux.  He returned home and was demobilised in March 1919. He was awarded the Victory Medal and the British War Medal.

After the war he lived in Spratton for a time and played in Spratton football team.  He then moved to Yorkshire and worked at Sharlston Colliery. In 1926 Arthur married Gertrude Florence Manning, a cousin, who had once taught in Cottesbrooke.  He died in Pontefract in 1982, aged 84 and was buried in Snydale Cemetery in West Yorkshire.  His wife died the following year and was buried alongside him.