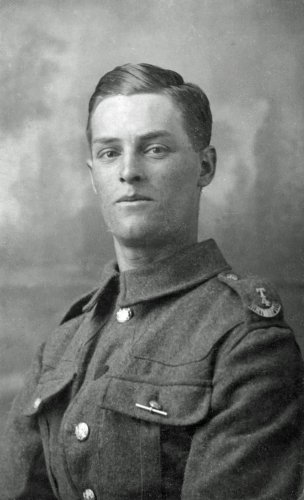 George was born in Spratton on 14 August 1893. He lived in Manor Road, Spratton with his parents George, a bootmaker from a long-established family in the village, and Clara Elizabeth, a laundress and five siblings Arthur, Evelyn, Mary, Bertha and Louis.  By 1911 he had moved next door and was living with his cousin Charles Edward Manning and working as a labourer.  Both George and his younger brother Arthur served in the First World War.

He volunteered in January 1915 and in July 1915 aged 22 he was drafted to the Dardanelles, where he was involved in heavy fighting at Suvla Bay and in the evacuation of the Gallipoli Peninsula.  Later he proceeded to Egypt and Palestine and took part in the battles of Gaza (I, II and III).  He was demobilised in April 1919 and awarded the 1915 Star, the Victory Medal and the British War Medal.

He married Rose M Crowe in 1923. They had twin daughters, both of whom married American Servicemen stationed in the UK during the Second World War.  George died in June 1931 aged 38.