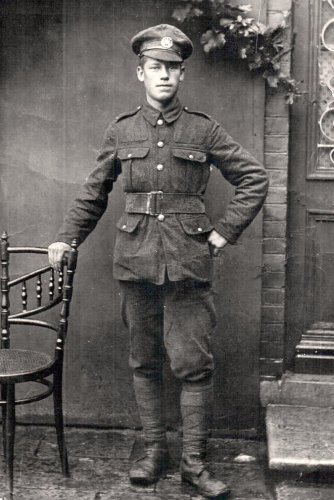 Frank Smith was born in May 1898 in Spratton and baptised later that month.  He was the son of Reuben Smith, a farm labourer from a long established family in Spratton, and his wife Elizabeth (née Buckby) and brother of John William and Abraham.  The family lived in Smith Street, opposite Home Farm.  All three brothers served in the First World War and sadly, John William was killed in action. After leaving school, Frank worked as a farm labourer and on 3 February 1917 he married Kate York in Brixworth Registry Office. Their daughter Elizabeth Emma was born on 21 June 1917. The couple lived in a small cottage in Spring Gardens on Middle Turn, Spratton, (now Brixworth Road).

Frank was called up into the Army Reserve on 3 November 1916 when he was 18 (and before he married Kate) and he enlisted in the 3rd Northamptonshire Regiment on 17 April 1917 giving his occupation as a farm waggoner.  He was sent overseas with the British Expeditionary Force on 1 July 1917 (a few days after the birth of his daughter). A year later he was badly injured with gun-shot wounds to his arm and shoulder when his battalion was fighting on the front line in the Cambrin area. Frank was discharged from the regiment on 5 March 1919 as no longer fit for service.  He was issued with a Silver War Badge to wear at home to show he had been wounded in the war. Frank was also awarded the British War Medal and the Victory Medal.

Frank may have died in June 1955 aged 57, but this has not been confirmed.