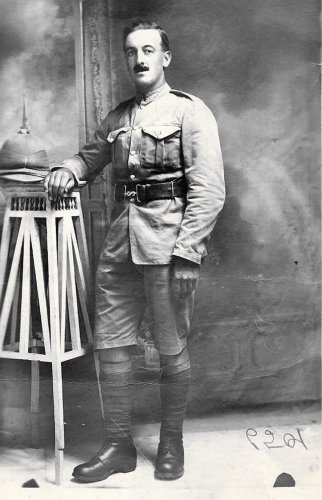 William was born in Cottesbrooke in July 1889, the son of Frank Buswell, a gardener, and his wife, Sarah. When he left school, William became a groom. He moved to School Road, Spratton, most likely to obtain employment in one of the large houses in the village, and was living there at the time of the First World War.

He volunteered in the Territorial Force in May 1915 in the Northamptonshire Yeomanry aged 26. In December 1916, whilst home on leave, he married Lily Williams. He was transferred to the Military Mounted Police Corps in January 1917 and was a military policeman for just under a year. He was sent overseas in November 1917 and served in Egypt and Palestine. He took part in heavy fighting at Gaza and near Jerusalem before it was captured, and was afterwards present at the capture of Jericho and Tripoli. He was demobilised on returning home in June 1919. He holds the British War Medal and the Victory Medal.

William returned to live in Spratton after the war with his wife and daughter Eileen (born in 1918). They lived at Ferndale in Manor Road and later in Waltham Cottage in the High Street. William died in Spratton on 14 April 1957 aged 68.