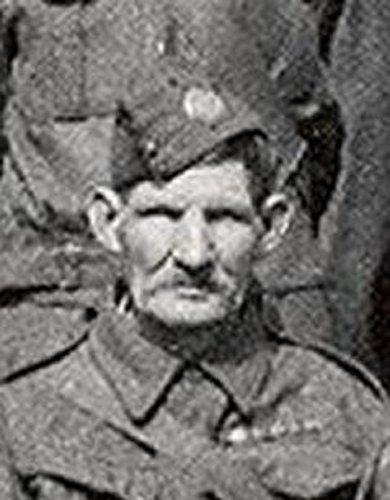 Walter was born in Spratton on 14 May 1888, the son of farm labourer John Wykes and his wife Harriet. The family lived in a cottage in Manor Road and three of the sons, John Francis, William and Walter, all served in the First World War. Walter was a farm labourer working at Broomhill Farm for Sir Mervyn Manningham-Buller.

He suffered a gunshot wound to his hand in February 1917 and was treated in France at Rouen Hospital. Having been sent home for hospital treatment in Birmingham where one of his fingers was amputated, it was decided he was no longer fit for front-line duty and in December 1917 he was transferred to the Agricultural Unit of the Labour Corps. He worked on farms in this country until he was demobbed in May 1919. (Walter’s discharge documents were addressed to him at ‘Near the Hall, Spratton’. Later papers were sent to him at ‘Near the Hole, Spratton’.) He received financial compensation for his injuries and was awarded the 1915 Star, the British War Medal and the Victory Medal.

After the war, Walter and his wife Winifred lived in Brixworth Road, Spratton, and he served in the Home Guard in the Second World War.  He died on 2 March 1959 aged 71 and is buried in the new parish cemetery in Spratton, as is his wife.