Albert was born in Yorkshire in the summer of 1887, the son of John Manning, an agricultural labourer from a long-established family in Spratton, and his wife Elizabeth.  Albert lived in Yew Tree Lane with his wife, Mary, and children Reginald and Doreath, who were baptised together at Spratton Church in October 1911.  He was employed as a bricklayer’s labourer. His older brother, George, was killed in action in the First World War.

He enrolled as a private with the Territorial Force on 2 June 1915 aged 28 and was assigned to the Northamptonshire Regiment, but did not go overseas.  On 27 December 1915 he was temporally released to work in the coalmine of Messrs Grayson, Lowood and Co Ltd, Deepcar, Sheffield.  His service record includes a list of the military kit he was required to return.  He was subsequently reassigned to a “light job” for the Admiralty at Cranwell, on doctor’s advice.  On 14 July 1917 he was transferred back to the Territorial Force Reserve for civil employment as a munition worker, and finally demobilised on 19 February 1919. As he did not go overseas he was not entitled to the campaign medals. 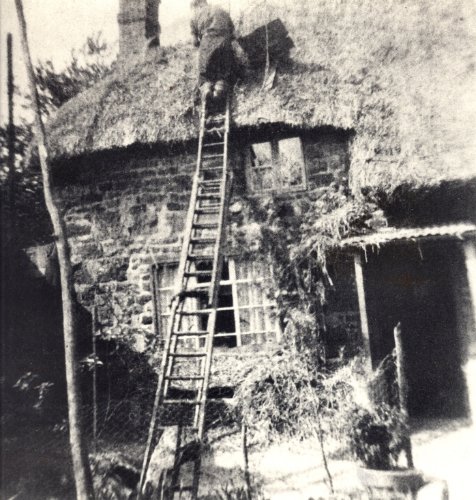 The house in Yew Tree Lane where Albert and Mary Manning lived, being rethatched after the First World War

The house in Yew Tree Lane where Albert and Mary Manning lived, being rethatched after the First World War