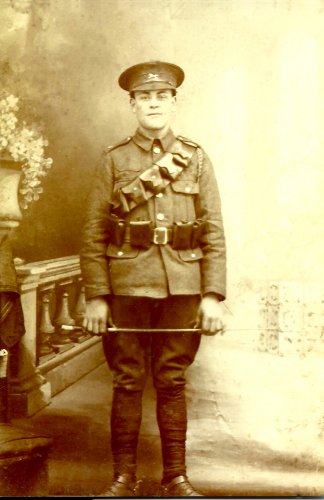 Joseph Henry was born in Scaldwell, Northamptonshire in September 1898, the son of Joseph Leeson, a groom, and Martha, his wife. To distinguish him from his father, Joseph junior was known as Harry.  By1901 Joseph and Martha had moved to Spratton with their six children. Joseph and his eldest son, Francis, had obtained employment as grooms for Lord Erskine at Spratton Hall and the family were provided with one of the Hall’s small thatched cottages in Manor Road. Three of the Leeson brothers served in the First World War – John (killed in action in 1918), Harry and Thomas.

We know little about Harry’s service record, but he is unlikely to have joined up before 1916 when he was 18.  He served in Egypt with the 1st  Berkshire Yeomanry and was demobbed on 23 March 1919. He was awarded the British War Medal and the Victory Medal.