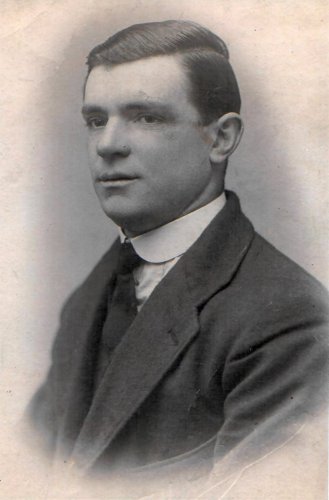 John Andrew was born in October 1896, the son of William Wykes, a farm labourer, and his wife, Hannah (née Manning, a long-established family in Spratton).  He lived in a cottage on the corner of Manor Road and Haynes Lane, Spratton with his brothers Henry, Alwyn, Harold and Bert and sisters Sarah, Mary and Emily. Later he lived at Ivy cottage, Spratton.  He worked as a labourer and also as a tram driver for Northampton Corporation Tramways.  Both Jack and his brother Alwyn served in the First World War. It was unusual at that time, that Jack and his brother both signed their Attestation papers with a cross, rather than signing their own name.

He volunteered for the Northamptonshire Regiment on 11 December 1915 aged 19 and was called up for Home Service on 26 January 1916. On 4 May 1916 he was posted to France and fought in the Battle of the Somme at Delville Wood.  On 16 July 1916 under heavy fire, some of the men sheltered in a shell hole, joking that the same spot would not be hit twice. A shell exploded close to them and Jack’s three friends were killed.  Jack survived but his feet were badly injured. He was repatriated and both legs were amputated.  He was awarded the British War Medal and the Victory Medal.

Jack was was discharged as permanently unfit with a pension of 27s 6d per week on 4 April 1917. He was issued with a Silver War Badge on 18 June 1917 to wear at home to show that he had been wounded in the war. He was then sent to Queen Mary’s Convalescent Hospital, Roehampton, to learn to walk again.

Jack returned to Spratton, married Ethel May Hemmings in 1923 and worked as a hawker selling fruit and vegetables around the village with a horse and cart.  He died on 16 September 1979 aged 82 and is buried in the new Parish Cemetery in Spratton by the side of his wife who died in 1975.