Cecil was born in Northampton on 3 June 1892, the son of William Stevens, a shoe finisher, and his wife Phoebe (née Wykes).  He seems to have attended the village school in Spratton for a short time, but by the time he was eight years old the family were living in Rushden, Northamptonshire.  Ten years later in 1911, Cecil was working as a metal caster in Holloway, London.

Cecil volunteered for the Northamptonshire Regiment on 27 February 1915 and gave his address as Finsbury Park, London.  He was sent overseas with the regiment and was wounded in the fighting on 21 August 1915. He was sent back to hospital in England to recuperate and, having recovered, he returned to the Front in March 1916.  He was disciplined twice in 1917 for being late falling in on parade. In July 1917 he took part in the Battle of the Dunes on the Belgian coast and received a gunshot wound to the chest. He was captured and taken prisoner by the Germans and died of his wounds in the German Prisoner of War camp in Ostende. Cecil is buried in the Ostend Military Cemetery, Belgium. He was awarded the 1915 Star, the British War Medal and the Victory Medal.

His effects were forwarded to his mother Phoebe Stevens who was living with her mother in Spratton.  Phoebe died in Spratton in 1918.  Cecil’s medals were sent to his father William Stevens at Cooper’s Yard, Spratton. The Vicar of Spratton, the Reverend George Raw listed Cecil as one of Spratton’s ‘gallant war dead’ in his Newsletter of November 1917. 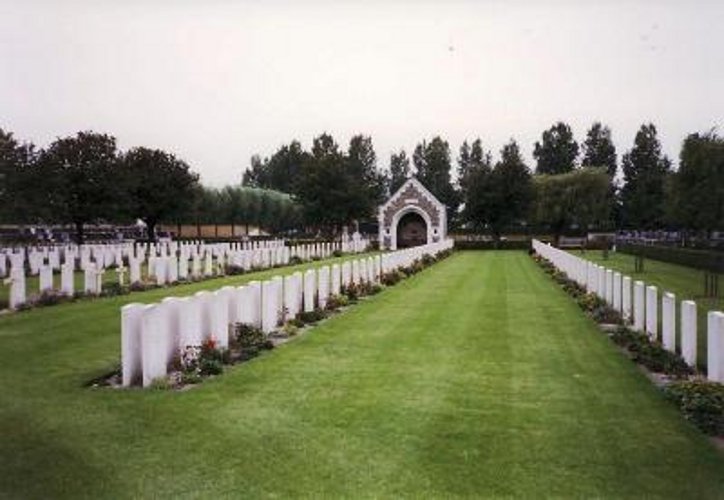