RESEARCH ON THE SPRATTON MEN 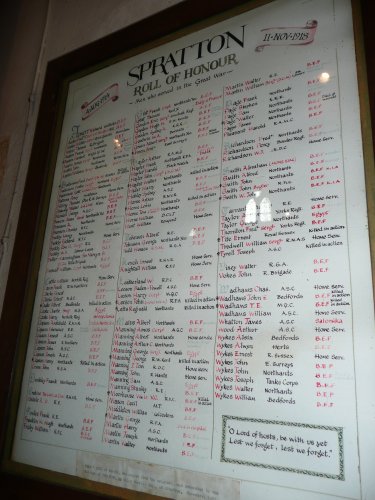 133 men from Spratton are named on the Roll of Honour in Spratton Church. The collection of names for this Roll was mentioned by the Vicar of Spratton, the Reverend George Raw, in his Newsletter as early as 1915 and the final document was presented to the Church by Miss Bevan of Spratton House in July 1920. The Roll gives the name of each man, his regiment and the theatre of war in which he served. Names given are often the name by which the man was generally known rather than the actual name on his birth certificate.

Present day research has found a further 35 men who were born in Spratton or who lived here for some considerable time and who served in the First World War. Sources for these extra names are: the Vicar's monthly Newsletters 1914-19, Absent Voters' List 1918, school log books, census returns, relatives.

It has been difficult to find those men who moved to the village after 1911 if they are not in any of the records listed above. We must wait for the 1921 census. We should be pleased to have information about any man we have missed. Please contact information@sprattonhistory.org

Who were the men from Spratton who served in the First World War?

The men from Spratton who served in the army, navy and the newly formed air force were aged between 18 and 50 years and came from all walks of life. However, we have found a number who tried to enlist before they were 18 years e.g. John Higgs. 48% were from long established families in the village such as the Martin, Buckby, Horne, Taylor and Wykes families. Other families with three or more generations in the village were: Adnitt, Archer, Austin, Balderson, Copson, Gammage, Manning, Norman, Page and Smith.

The majority of men who served (52%), however, were newcomers who mostly came to Spratton seeking employment in the nearby ironstone quarries, on local farms, in the building trade or in service at the large houses in the village. A number of these men married girls from Spratton and stayed here for the rest of their lives.

Most newcomers (35 men) were employed in domestic service as gardeners, grooms, footmen, butlers and chauffeurs. These men and their families travelled around from one large house to another, often for promotion - e.g. from footman to butler, or from under-gardener to head gardener. In Spratton they found work at: 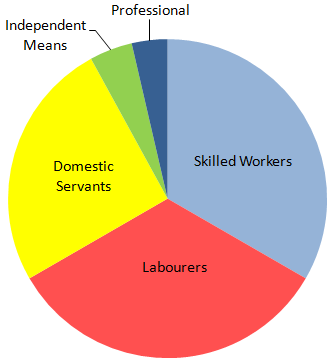 Professional (3.62%, 5 men) including clerks, a trainee teacher, an M.P. and a policeman

When did the men of Spratton join up?

Of the total number of men from Spratton who went to war (168), by far the majority served in the Army (152). Some were already in the Regular Army, and some were in the Reserves. Others volunteered and some waited until conscription in March 1916. Some teenagers were so keen to serve that they tried to sign up before they were 18. At the moment, we have no information about men in reserved occupations nor about any who applied for deferment to a Military Tribunal (work in progress).

We know that 12 Spratton men had chosen the Regular Army as a career and were already serving when war was declared. Also, one teenager (Baden Gammage) was a boy entrant to the Duke of Edinburgh's Wiltshire Regiment. The Spratton "Regulars" had served in India, Egypt, the North-West Frontier, Malta, South Africa, Ireland and France. They were the first to be mobilised when war was declared in August 1914 and most were sent overseas with the British Expeditionary Force (BEF).

Other Spratton men (15) had served in the Regular Army and at the end of their term of service they signed on in the "Reserves". They were required to undertake training once a year and agreed to be mobilised should war be declared. These men were mostly called up in August 1914.

Some Spratton men volunteered in 1914 and in 1915, quite a few of them under the preferential terms of Lord Derby's Scheme in the autumn of 1915. Others waited for conscription in March 1916 and some had to wait until their 18th birthday.

Which Regiments did Spratton men join? 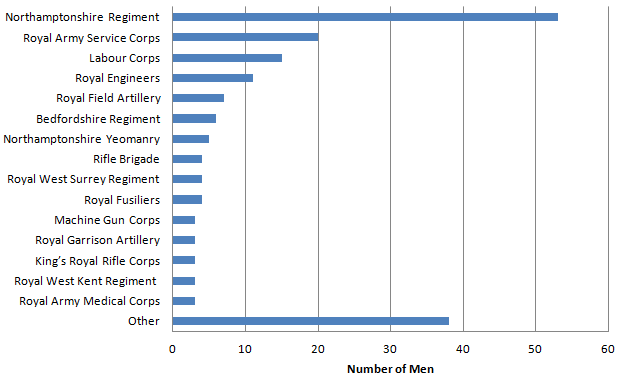 Spratton men who served in the Royal Navy

Spratton men who served in the Royal Volunteer Naval Reserve

Spratton men who died in the First World War

At least 18 men returned from the war very severely injured. They had lost limbs, been gassed, shelled and shot at. Many had spent a considerable amount of time in hospital. They were issued with a Silver War Badge to wear at home to show that they had been injured in the war.

Issued to all those who served in France and Belgium between 5 August 1914 and midnight 22/23 November 1914. A clasp, consisting of a small silver rosette on the ribbon, was added for those who had served under fire.

Issued to those who served in a theatre of war before 31 December 1915 and who did not qualify for the 1914 Star.

The highest award for valour in the face of the enemy. It takes precedence over all other awards and is awarded to all ranks.

The second highest award for gallantry after the Victoria Cross and awarded to those below commissioned rank.

Awarded to commissioned officers for acts of exemplary gallantry in the face of the enemy.

Awarded to non-commissiond ranks for acts of gallantry on land.

Monthly newsletters of Vicar of Spratton 1914-1919