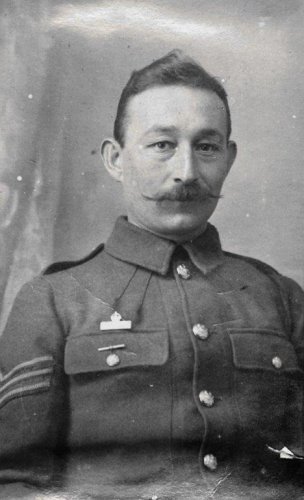 Joseph Eldred was born in Easton-on-the-Hill, Northamptonshire, in 1884, the son of Robert Eldred a foreman of a limestone quarry, and his wife, Ellen. The family moved to Kettering. On 7 June 1900 (when he was almost 16) Joseph went to Northampton and tried to join the army by claiming that he was 18. In August 1900 he was discharged "having made a mis-statement as to age".

In 1904 when he was 20, Joseph married Rose Twisleton, who came from Kingsthorpe, Northamptonshire, and they lived in Geddington and had three sons. Joseph worked in the iron ore quarries.

We know that at some stage Joseph and Rose came to live in Rosedean, First Turn, Spratton (now Holdenby Road) but have little further information about him. Joseph died in 1953 in Daventry.